You can connect directly with de Unstoppable on the following: 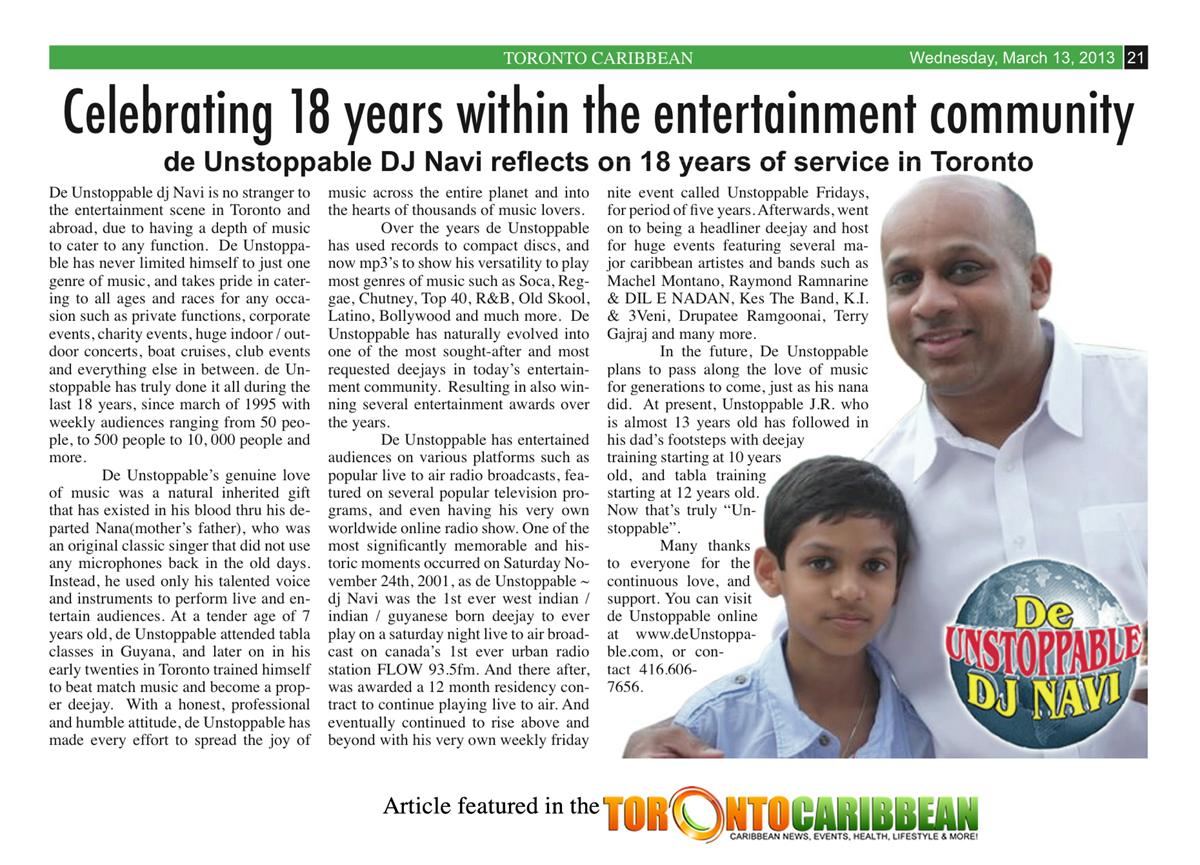 2012 was yet another successful year for de Unstoppable ~ dj Navi. Taking each event to a next level whether it's a private function or public function, de Unstoppable certainly delivered quality entertainment beyond all expectations. With weekly functions and events that catered to the ever changing music trends and classic tunes, de Unstoppable continues to deliver a wide variety of excellent music to every function.

Many thanks goes out to all the private clients(such as weddings, anniversaries, birthdays, engagements, corporates, etc...), the various media outlets, event establishments, promoters, bands and artistes( too many to mention) whom de Unstoppable has been fortunate enough to work alongside with. But most of all, a big thanks to all who tremendously supported the #1 "Sold Out" boat cruise within the toronto harbour at the beginning of the caribana weekend = KARNIVAL ON DE LAKE.

As 2013 approaches, de Unstoppable plans to grow much bigger on a musical scale and truly give audiences more music at every function by going into the digital spectrum. The growth of de Unstoppable Entertainment, and the Family of Music will encompass a new member who will be lauched as the newest, youngest, versatile and talent deejay within the planet "de Unstoppable JR". Giving you true musical experience "de Unstoppable" style.

As always, many Thanks to Everyone for the continuous Love and Support.
de Unstoppable ~ dj Navi

Without a doubt de Unstoppable ~ dj Navi has exceeded and surpassed all expectations and was hired to deejay on many large shows featuring most of the major caribbean artistes and bands such Raymond Ramnarine & Dil E Nadan, K.I. & JMC 3Veni, Kes The Band, RAVI B, SW STORM & The Raw, Terry Gajraj, Anil Bheem & N2, T&T Express, Devika Ram, Omesh Singh & The Wave Band, Destiny Band, and many, many more. Of course, many thanks goes out to all of the industry individuals whom have worked alongside de Unstoppable such as the event organizers, fellow deejays, promoters, security personnel, radio, television, newspapers, various organizations, ticket outlets, and flyers/posters printers.

Once again, de Unstoppable Entertainment has started the trend to showcase the only successful sold out boat cruise on the evening of Karibana Thursday, featuring an actual concert ontop the waters of Lake Ontario. This one of a kind event was appropriately titled "KARNIVAL ON DE LAKE" Boat Cruise, with many happy and satisfied music lovers wanting more. With over 150 advance tickets already pre-sold for KARNIVAL ON DE LAKE 2012, we are 100% sure that this upcoming event will be another SOLD OUT boat cruise with quality entertainment from beginning to end. Get your early bird advance tickets for the 2012 edition of KARNIVAL ON DE LAKE Boat Cruise. Early bird tickets are now available, kindly phone 416.606-7656 to reserve yours today.

As always, many Thanks to Everyone for the continuous Love and Support.
de Unstoppable ~ dj Navi

2010 has been one of the most record breaking and successful years for de Unstoppable ~ dj Navi, which included deejaying at over 50+ private functions, a Guyana Tour, being on the biggest shows and park events and ending it off with the highly successful New Years Eve event. Many Thanks goes out to all the local and foreign loyal fans, promoters, artistes, bands, radio, televison, online media, various businesses and corporate clients that has worked alongside and supported de Unstoppable ~dj Navi. Dedication and hard work has now elevated de Unstoppable ~ dj Navi to humbly earn the respect of those within the entertianment industry within Toronto and abroad. Without a doubt de Unstoppable ~ dj Navi is now appropriately labeled as " T.O.'s most requested dj ".

Keep it locked here to your #1 source of quality and respectable entertainment - www.deUnstoppable.com

As always, Thank You for the love and support.

Now you can listen to the various promo mixes from de Unstoppable dj Navi via our website player on the left, window while browsing thru deUnstoppable.com, or download the mixes to your I-Pod, PC or Laptop by clicking on any of the following links:

Check out the BEST OF BOTH WORLDS promo mix using the various links below:

Also check out the Holics promo mix using the various links below:

Also visit www.UnstoppableRadio.com
featuring All types of music for all people

De Unstoppable's past articles, and commentaries

Purpose:-       To give you a taste, and share the longest ever friday nite party through out the history of the Toronto caribbean community.

Big Thanks goes out to all of our past weekly supporters who have continuously supported Unstoppable Fridays since it's August 13th, 2002.  This was Toronto's #1 eastend friday nite party that has made history, as being the first ever and longest running weekly venue within the caribbean community.

Below is just a facts to share with you the overall success of Unstoppable Fridays within the year of 2003.

The SOLD OUT success continued on friday May 2nd at 12am for the Recession Edition,  and also SOLD OUT on May 9th for the Stress Free Edition at 12:10am. Of course every long weekend was always SOLD OUT and on victoria day long weekend friday may 16th at 11:41pm the doors were locked, then on friday may 23rd for EAST meets WEST pt #2 at 1:21am the night was marked SOLD OUT. We ended the month of may with a bang for being SOLD OUT at  1:10am, for the SOCA meets R&B Edition on friday may 30th.

August started off as a hugh SOLD OUT success, as August 1st was Caribana friday in T.O. with many in the festive mood and of course the only choice for the start to the long weekend was the "SOCA Edition" of the UNSTOPPABLE FRIDAY's which was SOLD OUT at 12:21am.  Again, big thanks to everyone and especially all of the Americans who joined us to wine from start to end.  Without a doubt the "SWEAT DOWN" Edition on friday August 8th was SOLD OUT at 12.42am - WHAT a Party that was !!!!!! People were still in the caribana mood.

North American's were very shocked by the huge BLACKOUT on thursday August 14th.   But even the BLACKOUT could not stop the SOLD OUT crowd who attended the "WHINING Edition" on friday August 15th.  Now that's truely history in the making, with this nite being SOLD OUT at 1am sharp.  With the electricity conservation still in effect, to our surprise "da WHINE DOWN Edition" on friday August 22nd was SOLD OUT at 12:25am.  We ended the summer of 2003 with a "SEXY, SEXY, SEXY Edition", which was a BIG SOLD OUT SUCCESS at 12:10am, with an amazing long, long, long line up alongside the building to the end of the building within the complex by the pizza store.

Despite back to school, we certainly started off the month of september with yet another amazingly SOLD OUT nite on friday sept 5th.  The "Whine Till Yuh Drop Edition" was SOLD OUT at 12:22am.  And the historic SOLD OUT success continues for the EAST meets WEST pt #5 Edition - Back by Popular Demand, which was SOLD OUT at 12:54am on Sept 12th.  Friday Sept 19th will always be remember as the friday when everyone prepared for Hurricane Isabel which slight touched us, but still that was no match for the UNSTOPPABLE FRIDAY's. We still managed to achieve a SOLD OUT at 1:14am due to strong promotions, and the dedicated followers who made UNSTOPPABLE FRIDAYS their weekly friday nite home.  We ended the month of sept with a BIG Surprise - we did a FREE $$$$$ giveaway on Friday Sept 26th, and made lots of party people "happy winners and winers".  We certainly had a real late SOLD OUT crowd at 1:40am, but it certainly was one amazing party - WOW.

As the cold weather began to set in, we started the month of october with a bang - incredible and true the SOCA Edition of the UNSTOPPABLE FRIDAY's was SOLD OUT at 1:09am on friday october 3rd.  Of course, we all know that the Thanks Giving Long Weekend is the final long weekend of the year, and what a turn out to the UNSTOPPABLE FRIDAY's on friday October 10th.  Yes, we were SOLD OUT at exactly 11:59pm.   Big Thanks to everyone for the strong support.

As we started the 2003 christmas season, many Torontonians choose the Fast and Furious Whine Down edition of the UNSTOPPABLE FRIDAY's as the place to be on friday dec 5th. Of course, this party was SOLD OUT at 12:59am. The first official snow fall of 2003 on friday dec 12th did not, and could not stop the true party people and music lovers from coming out to the 2 Fast 2 Furious Whining edition of the UNSTOPPABLE FRIDAY's which was SOLD OUT at 1:37am. As we proceed in the christmas, the Candy Cane Edition was very successful, with everyone receiving FREE candy canes and several surprise gifts on friday dec 19th. The doors were locked at 12:41am, as the party was totally, totally SOLD OUT. As we approached the final UNSTOPPABLE FRIDAY for 2003, we definately ended the year in an exceptionally big way, with being SOLD OUT at 11:57pm, on Boxing Nite friday dec 26th.

As we start 2004, we certainly had the biggest SOLD OUT friday nite within the east end of the city, as the FLASH BACK Edition of the UNSTOPPABLE FRIDAYS on friday jan 2nd was SOLD OUT at 12:12am. To all who waited in the long line up around the building - we kept preaching to please arrive early to avoid disappointment. On the coldest nite of the month friday jan 9th, 2004 we were SOLD OUT at 1:31am for the 1st Annual Coat Drive Edition. As the cold weather turned into a deep freeze, many torontonians still came out to support the part #2 of the 1st Annual Coat Drive Edition of the UNSTOPPABLE FRIDAYS on friday jan 16th, which we were almost SOLD OUT. The forth weekend of january continued to be cold and miserable, but that did not stop the F.O.M. Appreciation Party on friday jan 23rd. This last friday for the month of Jan 2004 proved to be a BIG SOLD OUT success. Yes, we were SOLD OUT on friday jan 30th, at 1:07am.

This weekly successful friday nite event continued for many more years, and the name UNSTOPPABLE FRIDAYS has become legendary through out the caribbean community.

From all races to all faces, all of this could not have been possible with the support of you - the general public, the entire F.O.M. = Family of Music team, the security staff and management.

Thank You All for the Tremendous amount of support. 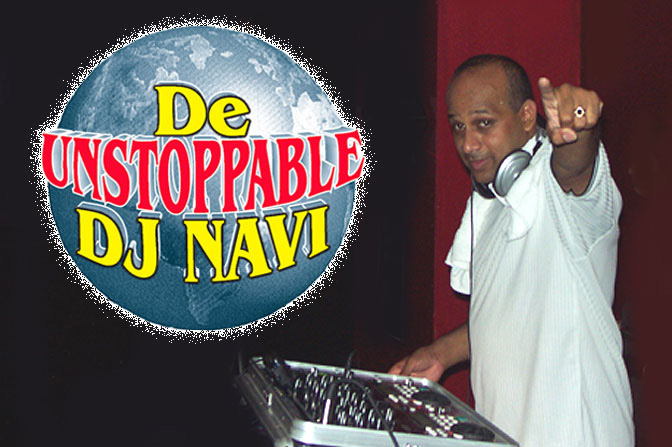